skip to main | skip to sidebar

Par-baking bread is a great way to increase variety and still produce exceptional quality. The process, as I use it, is very simple.
First of all, I only par-bake sourdoughs. They are mixed, given full ferment, then made up, and retarded overnight. The next day they're given a final proof and baked. That is the same as always.
It is the baking that is a little different. The breads are baked at a slightly lower temperature for a little less time than usual. For instance, plain sourdough normally bakes at 450 for fifty minutes. To par-bake, it is given forty minutes at 400 degrees. Most specialty breads are baked for the same amount of time, but at a slightly lower temperature (375). The crust color is light, but the bread is baked through. The loaves are cooled almost completely, then double wrapped in plastic and frozen, and I can then pull the exact number of loaves I need to finish.
Finishing is simple. In fact I often use a convection oven set very hot (425-450) for this. I just slide the still frozen loaves off of a peel directly onto the oven racks and bake them for about 10 or 15 minutes.
Done.
Can I tell the difference between a freshly proofed and baked loaf and a par-bake? Well, yes, I can. Are my customers able to tell? No, probably not. In fact, many of them buy the frozen par's to finish in their ovens at home!
Posted by kevroy at 9:55 PM No comments:

At the Farmer's Market 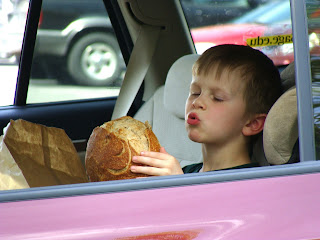 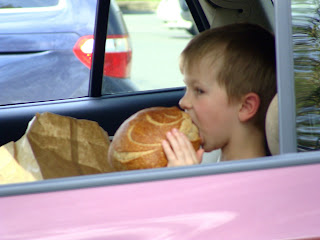 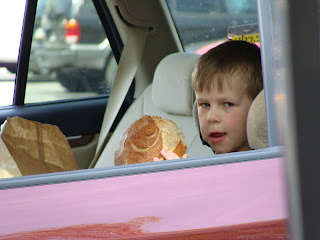 Son, that's beer bread you're eating. I'm going to need to see some identification.
Posted by kevroy at 7:48 PM No comments: 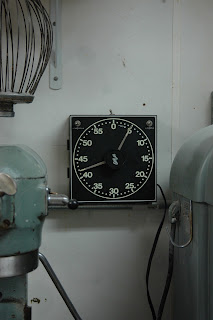 Apparently, even the Hobart repair guy can't change a mixer's on-off switch from a toggle to a timer, which means there has to be a timer in the mixer's power supply.

Enter the darkroom timer, the kind that was in every high school darkroom before digital photography. It works great: no more listening for the ring of a wind-up timer, the mixer shuts off when the mixing is done with a buzzer you can hear in the next county.
Posted by kevroy at 9:16 AM No comments:

I needed more bread pans, the kind that are strapped together in gangs of four or five and are easier to rotate in the oven than singles. And I like used bread pans better than new ones because they're seasoned. That is to say, I like used pans better if they don't look as if they've been hit by a forklift.

So we, Brian and I, made the hour-long trek to my friends bakery equipment warehouse.

"Warehouse," said Brian, as we stepped from the office into the storage area, "It's more like a graveyard."
There were no electric lights turned on; the heaps of tools that first greeted us were illuminated by ambient light. The second thing to greet us was the smell. The sickly sweet odor of rancid fat and mildewing flour permeated the clammy dusk.
Not in the market for small tools we turned left and walked down the center aisle, past the nearly colorless forms of gigantic ovens stacked up two stories high, their doors gaping open, silently keening. Large, complicated machines with uses difficult to understand cluttered the way. When we reached the place where one turns left or right, Brian went to the right, into an area lit by skylights. I turned left.
I was familiar with the place, having been in the old building many times before. It had been built as a boiler factory in the late 1800's, and was now a part of the industrial decay of this nation, filled to the girders with the contents of numberless defunct bakeries. The kind of place to find, say, parts for an antique mixer.
The room I was heading for was completely dark, and I could never remember where the light switch was. There were switches all right, and bare wires sticking out of conduit on the wall, too. Fumbling around, I noticed a small alcove I'd never seen before. A trillion specs of dust hung motionless in the waxy light that leaked through a filthy, ancient window, and as my eyes adjusted to the gloom I saw at my feet stacks of cake pans. They were all prepped, each one with a fluted paper liner inside of it.
I began to ponder this. There they were, all of them ready to be filled with cake batter. So why would pans that were to be taken from a closing bakery be readied for use? What happened that day?
Did the boss come in and say,"Sorry fellas, this is it," at the beginning of the day or the end.
Did the guy who put those liners in there know he was about to become unemployed, or was the shop padlocked when he got to work one morning?
A faint voice called me from the office door, and my friend, the owner, came to where I was and turned the light on for me. I searched for about an hour, and found the pans I was looking for. Back at my shop, I filled the pot sink with hot, soapy water and let the pans soak overnight. The next day I scrubbed them with a stiff brush, rinsed them in hot water and dried them in the oven. After all that, they needed to be seasoned, which I did; even so, bread stuck to them at first.
But after years of use, nothing sticks. There are almost never any surprises.
Posted by kevroy at 7:43 AM No comments:

Just the thing for a young couple starting out. Just the thing for two kids who happen to be bakers. The challenge for us was to turn an ugly old building into something beautiful and functional; the work space is pleasant and sunny, the outside is inviting. But really, the challenge for us was in getting it going, and now we're ready to move on to the next adventure, whatever that is.
(I think for me it's to get my masters and teach cooking in a post secondary school.)
Well, the right people will come along and fall in love with it, growing it into the future.
Posted by kevroy at 8:46 PM No comments:

kevroy
Everyone is my superior in one way or another.